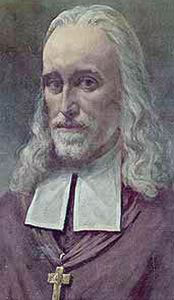 Oliver Plunkett was born in Loughcrew in County Meath, Ireland on November 1, 1629. In 1647, he went to study for the priesthood in the Irish College in Rome. On January 1, 1654, he was ordained a priest in the Propaganda College in Rome.

Due to religious persecution in his native land, it was not possible for him to return to minister to his people. Oliver taught in Rome until 1669, when he was appointed Archbishop of Armagh and Primate of Ireland. Archbishop Plunkett soon established himself as a man of peace and, with religious fervor, set about visiting his people, establishing schools, ordaining priests, and confirming thousands.

1673 brought a renewal of religious persecution, and bishops were banned by edict. Archbishop Plunkett went into hiding, suffering a great deal from cold and hunger. His many letters showed his determination not to abandon his people, but to remain a faithful shepherd. He thanked God "Who gave us the grace to suffer for the chair of Peter." The persecution eased a little and he was able to move more openly among his people. In 1679 he was arrested and falsely charged with treason. The government in power could not get him convicted at his trial in Dundalk. He was brought to London and was unable to defend himself because he was not given time to bring his own witnesses from Ireland. He was put on trial, and with the help of perjured witnesses, was sentenced to be hanged, drawn and quartered at Tyburn. With deep serenity of soul, he was prepared to die, calmly rebutting the charge of treason, refusing to save himself by giving false evidence against his brother bishops. Oliver Plunkett publicly forgave all those who were responsible for his death on July 1, 1681. On October 12, 1975, he was canonized a saint. His feast day is July 1st.

Today, we humbly ask you to defend Catholic Online's independence. 98% of our readers don't give; they simply look the other way. If you donate just $5.00, or whatever you can, Catholic Online could keep thriving for years. Most people donate because Catholic Online is useful. If Catholic Online has given you $5.00 worth of knowledge this year, take a minute to donate. Show the volunteers who bring you reliable, Catholic information that their work matters. If you are one of our rare donors, you have our gratitude and we warmly thank you. Help us do more >
Continue reading about St. Oliver Plunkett