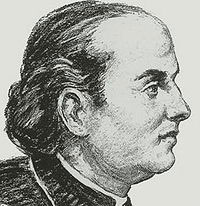 St. Caspar del Bufalo was the Founder of the Missioners of the Precious Blood. His feast day is January 2nd. Caspar, who was born in Rome, the son of a chef, in 1786, was ordained a priest in 1808. Shortly after this, Rome was taken by Napoleon's army, and he, with most of the clergy was exiled for refusing to abjure his allegiance to the Holy See. He returned after the fall of Napoleon to find a wide scope for work, as Rome had for nearly five years been almost entirely without priests and sacraments.

In 1814 he founded the Congregation of the Most Precious Blood and in 1815, it was formally approved. The second foundation was made in 1819 and the third shortly afterwards at Albano. His wish was to have a house in every diocese, the most neglected and wicked town or district being chosen. The Kingdom of Naples in those days was a nest of crime of every kind; no one's life or property was safe, and in 1821 the pope asked del Bufalo to found six houses there. He joyfully responded but met with endless difficulties before subjects and funds were collected.

Grave difficulties arose under Pope Leo XII; but these were cleared up, and in 1824, the houses of the congregation were opened to young clergy who wished to be trained specially as missioners. In his lifetime, their work covered the whole of Italy.

Del Bufalo's biographer gives us a graphic account of a mission, describing its successive stages. Some of his methods were distinctly dramatic, e.g. the missioners took the discipline in the public piazza, which always resulted in many conversions. On the last day, forbidden irearms, obscene books, and anything else that might offend Almighty God, were publicly burnt. A cross was erected in memoriam, a solemn Te Deum sung, and the missioners went away quietly.

His last mission was preached in Rome at the Chiesa Nuova during the cholera outbreak of 1836. Feeling his strength failing, he returned at once to Albano, and made every preparation for death. He suffered terribly from cold, and at night from parching thirst, but he would not take anything to drink, so that he might be able to celebrate Mass. After the feast of St. Francis Xavier he went to Rome to die. On December 19, the doctor forbade him to say Mass; he received the last sacraments on December 28, and he died the same day.

Various miracles had been worked by Don Caspar during his lifetime, and after his death many graces were obtained by his intercession. He was canonized in 1954.