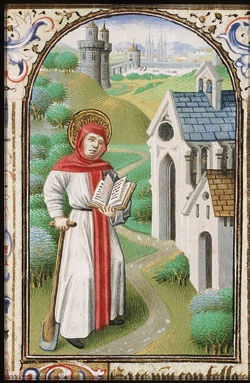 St. Fiacre (Fiachra) is not mentioned in the earlier Irish calendars, but it is said that he was born in Ireland and that he sailed over into France in quest of closer solitude, in which he might devote himself to God, unknown to the world. He arrived at Meaux, where Saint Faro, who was the bishop of that city, gave him a solitary dwelling in a forest which was his own patrimony, called Breuil, in the province of Brie. There is a legend that St. Faro offered him as much land as he could turn up in a day, and that St. Fiacre, instead of driving his furrow with a plough, turned the top of the soil with the point of his staff. The anchorite cleared the ground of trees and briers, made himself a cell with a garden, built an oratory in honor of the Blessed Virgin, and made a hospice for travelers which developed into the village of Saint-Fiacre in Seine-et-Marne. Many resorted to him for advice, and the poor, for relief. His charity moved him to attend cheerfully those that came to consult him; and in his hospice he entertained all comers, serving them with his own hands, and sometimes miraculously restored to health those that were sick. He never allowed any woman to enter the enclosure of his hermitage, and Saint Fiacre extended the prohibition even to his chapel; several rather ill-natured legends profess to account for it. Others tell us that those who attempted to transgress, were punished by visible judgements, and that, for example, in 1620 a lady of Paris, who claimed to be above this rule, going into the oratory, became distracted upon the spot and never recovered her senses; whereas Anne of Austria, Queen of France, was content to offer up her prayers outside the door, amongst the other pilgrims.

The fame of Saint Fiacre's miracles of healing continued after his death and crowds visited his shrine for centuries. Mgr. Seguier, Bishop of Meaux in 1649, and John de Chatillon, Count of Blois, gave testimony of their own relief. Anne of Austria attributed to the meditation of this saint, the recovery of Louis XIII at Lyons, where he had been dangerously ill; in thanksgiving for which she made, on foot, a pilgrimage to the shrine in 1641. She also sent to his shrine, a token in acknowledgement of his intervention in the birth of her son, Louis XIV. Before that king underwent a severe operation, Bossuet, bishop of Meaux, began a novena of prayers at Saint-Fiacre to ask the divine blessing. His relics at Meaux are still resorted to, and he is invoked against all sorts of physical ills, including venereal disease. He is also a patron saint of gardeners and of cab-drivers of Paris. French cabs are called fiacres because the first establishment to let coaches on hire, in the middle of the seventeenth century, was in the Rue Saint-Martin, near the hotel Saint-Fiacre, in Paris. Saint Fiacre's feast is kept in some dioceses of France, and throughout Ireland on this date. Many miracles were claimed through his working the land and interceding for others. Feast day is September 1st.