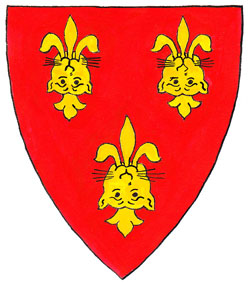 Bishop of Hereford, also called Thomas Cantilupe. Born at Buckinghamshire, England, circa 1218, he studied at Oxford, Paris, and Orleans. Returning to England, he became chancellor of Oxford University in 1261, using his influence to aid the barons in their struggle against King Henry III        (r. 1216-1272). In 1265, after the defeat of Henry's forces at the battle of Lewes, Thomas was named chancellor of England, although he was soon compelled to retire to Paris after the barons lost their grip on power. Returning to Oxford, he served once more as chancellor of the university in 1273. Two years later he was appointed bishop of Hereford, acquiring a wide reputation for sanctity and charity and serving as one of the most capable counselors of King Edward I (r. 1272-1307). He also was a stern opponent of simony and all forms of secular encroachment upon his episcopal rights. His relationship with Thomas John Peckham, archbishop of Canterbury, deteriorated over matters of jurisdiction, culminating in Thomas' excommunication by the archbishop in 1282. He appealed to the papal court but died before any decision was reached by the pope. Despite the controversy, Thomas was revered in England and miracles were reported at his tomb; in 1320, he was canonized.