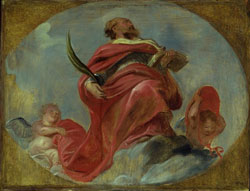 Cardinal and knight, the son of Duke Godfrey III of Brabant and brother of Henry I, duke of Lorraine and Brabant. At the age of twelve he was made a canon of Liege, France, but resigned from that priestly honor at the age of twenty-one to become a knight of Count Baldwin V, an enemy of Brabant. Albert proposed going on a crusade but did not do so, instead resuming his clerical life. He became a canon again and then was named the bishop of Liege. His appointment did not please Count Baldwin, who had one of his own relatives in mind. He appealed to Emperor Henry VI, who deposed Albert and appointed Lothair to the see. In turn, Albert appealed to Rome, and Pope Celestine III declared his appointment valid. While in Rome, Albert was recommended to Reims, where he was ordained and made a cardinal by archbishop William of Reims. The baffle for political control of Liege continued, and in time took a deadly toll. On November 21 or 24, a group of knights from Emperor Henry's court approached Albert, who greeted them with his customary gentleness. As he turned to ask them their purpose, he was stabbed to death. Lothair was excommunicated and exiled for his role in the denial of Albert as the true bishop of Liege. Emperor Henry VI was forced to make public penance for the actions of his knights. Albert's body was taken to the cathedral of Reims, where it reposed until 1612. Then Archduke Albert of Austria had the remains transferred to the chapel of the new Carmelite convent he had founded in Brussels. In 1822, part of Albert's remains were given to the cathedral of Liege.