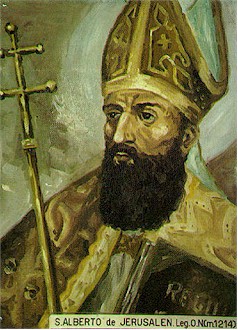 Patriarch of Jerusalem and patron of the Carmelite Order. He was an outstanding ecclesiastical figure in the era in which the Holy See faced opposition from Emperor Frederick I Barbarossa. Serving as a mediator in the dispute between the emperor and Pope Clement III, Albert was made an imperial prince, a sign of favor from Barbarossa. Albert was born in Parma, Italy, about 1149, probably to a noble family. He became a canon at the Holy Cross Abbey in Mortoba. In 1184 he was appointed as the bishop of Bobbio, Italy, and soon after he was named to the see of Vercelli. It was during this period of service as the bishop of Vereelli that he served as mediator between the pope and emperor. In 1205, Albert was appointed the patriarch of Jerusalem, a post established in 1099 when Jerusalem became a Latin kingdom in the control of Christian crusaders. Jerusalem, however, was no longer in Christian hands, as the Saracens recaptured the city in 1187. The Christians needed a patriarch, but the position was open not only to persecution but to martyrdom at the hands of the Muslims. Albert accepted and he proved himself not only diplomatic but winning in his ways. The Muslims of the area respected him for his sanctity and his intelligence. Because of teh Muslim presence in Jerusalem, Albert took up residence in Acre (now called Akko), a northern port. There he became involved in a concern that assured his place in religious history. Overlooking the city and bay of Acre is the holy mountain called Carmel. At the time, a group of holy hermits lived on Mount Carmel in separate caves and cells. Albert was approached by St. Brocard, who was the prior or superior of the group of hermits. In 1209, the hermits asked Albert to draw up a rule of life for them, a rule that would constitute the beginning of the Carmelite Order. Albert's rule regulating the monastic life of these men included severe fasts, a perpetual abstinence from meat, silence, and seclusions. Pope Innocent IV mitigated the rule in 1254, allowing that it was too rigorous. Albert mediated the dispute among various groups in Palestine and conducted Church affairs. He was called to the general council of the Lateran in 1215 but was assassinated before leaving Palestine. A madman that he had discharged from a local hospital stabbed him during the procession on the feast of the Exaltation of the Holy Cross.