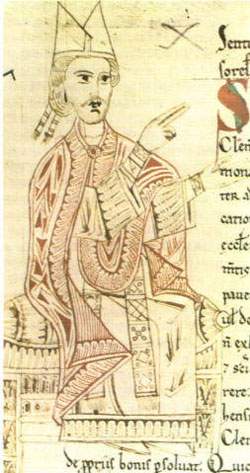 Gregory VII Born Hildebrand c. 1020 in Tuscany, Pope/St. Gregory VII was one of the great church reformers. Educated in Rome, Hildebrand was chaplain to Gregory VI, whose exile he shared. When Gregory VI died in 1047, Hildebrand entered a monastery where he remained until Leo IX called him to Rome to serve as treasurer of the church. Elected pope in 1073, Hildebrand took the name Gregory in honor of St. Gregory the Great and began to institute reforms against simony, clerical marriage (and/or unchastity), and lay investiture. The same year, he issued the Dictatus papae, which proclaimed the supremacy of the pope and avowed that the pope inherited the personal sanctity of St. Peter. Gregory's opposition to lay investiture led to conflict with Emperor Henry IV, who deposed Gregory at the Synod of Worms in 1076. Gregory promptly excommunicated Henry. The two were reconciled in 1077 at Canossa but had another falling out three years later. When Henry captured Rome in 1084, Robert Guiscard rescued the pope, who later fled to Monte Cassino to escape a popular rebellion against Guiscard. Gregory died in Salerno in 1085, and Paul V canonized him in 1606.