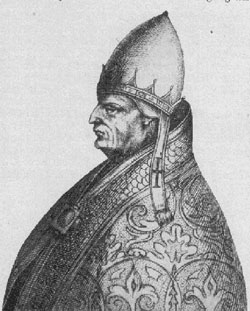 Gregory VI Born John Gratian, Gregory VI was the archpriest of St. John at the Latin Gate when he became pope in 1045, after the resignation of his godson, Benedict IX. Gregory may have bought the office, and he was found guilty of simony at the Synod of Sutri, convoked in 1046 by Emperor Henry III to determine which of the claimants to the see of Peter was the pope. Many believe that if Gregory purchased the papal throne, he bought it to save its reputation from the scandals of Benedict. After the synod, Gregory and his chaplain, Hildebrand, retired to Cologne, where Gregory died in late 1047.