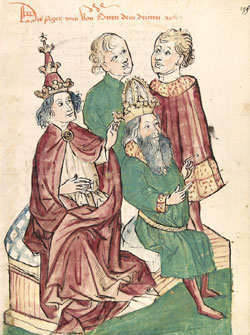 Gregory V The first German pope, Bruno of Carinthia was born in 972. He was the grandson of Emperor Otto I and was made pope by his cousin, Otto III, in 996. Bruno took the name Gregory in honor of St. Gregory the Great. He crowned his cousin Holy Roman Emperor after his own coronation as pope. When Otto left Rome in the fall of 996, Crescentius II led a rebellion against Gregory, who fled Rome. Crescentius made John Philagros (John XVI, whom historians have deemed an antipope) pope the following year. When Otto returned to Rome in 998, he restored Gregory and imprisoned John. Gregory died in 999 of natural causes.