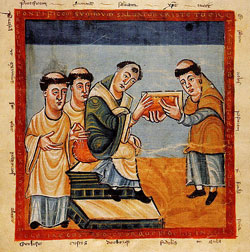 Gregory IV A native of Rome, Gregory IV was the cardinal priest of St. Mark's when he was elected pope in 827. He was crowned a year later, after he received approval from Emperor Louis I the Pious. As pope, Gregory fortified the port of Ostia against the Saracens and became involved in Lothair's 833 revolt against Louis; the rebellion was the result of Louis' having given half his kingdom to Lothair's half-brother, Charles the Bald. The pope accepted Louis' restoration in 834. Gregory, who died in 844, was also known for building churches in Rome.