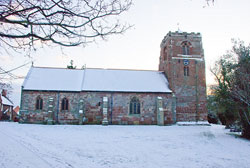 Eata St. Eata was one of twelve English youths whom St. Aidan educated at Lindisfarne, where Eata became a monk and a priest. At the request of St. Colman, he became the abbot. He was later abbot of Melrose and founded the monastery at Ripon in Yorkshire, which he left rather than abandon Celtic customs. After the Synod of Whitby, Eata, whom Bede describes as a man of peace, adopted Roman customs, and when Theodore of Canterbury divided the see of York into three bishoprics, he chose Eata to be the bishop of Bernicia. Eata served in this office from 678- 681. Theodore later split Bernicia into sees of Lindisfarne and Hexham and appointed Eata to Lindisfarne and Cuthbert to Hexham. The two men traded sees. Eata was the bishop of Hexham for a year before he died of dysentery in 686. He was buried near Wilfrid's church in Hexham.