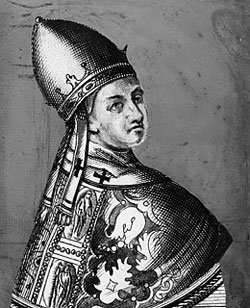 Benedict IX Rumored to have been 12 at the time he became pope, Benedict IX was probably in his late 20's when his family's position and money put him on the papal throne in 1032. Born Theophylactus, the pope led a dissolute life, and the Roman people drove him from the city in 1044 and elected Sylvester II pope or anti-pope. Benedict regained the papacy in the following year and sold it a month later to John Gratian, who became Gregory VI. Holy Roman Emperor Henry III convoked a synod at Sutri, which deposed all three claimants and elected Clement II, who died in 1047. Benedict held Rome at the time and retained rule until July 1048, when he was ousted in favor of Damasus II. Benedict retired to a family estate and refused to appear before a synod when charged with simony in 1049. He was excommunicated; Leo IX may have lifted the ban before Benedict's death in 1055/56.