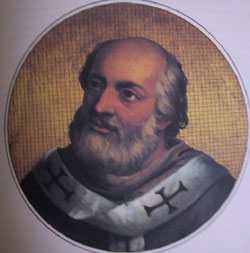 Benedict III Benedict was born in Rome and was educated in the Lateran school. He was elected pope to succeed Leo IV in 855, after the cardinal priest of S. Marco refused the honor. Benedict was enthroned without the consent of the emperor, Louis II, who then set up Anastasius the Librarian as pope and imprisoned Benedict. The people of Rome secured the release of Benedict. He repaired damage done in the city by the Saracens in 846 and by the floods of the Tiber. He died in 858. Some legends say that Pope Joan was the real pope at this time.