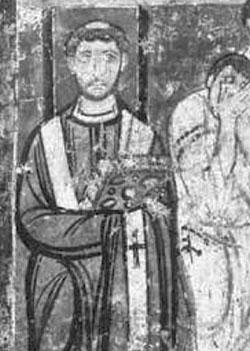 A Roman with Lombard heritage, St. Leo IV was a Benedictine before his election to the papal throne in 847. He was crowned without imperial consent and without imperial distress. He fortified Rome against the Saracens, who had sacked the city the previous year. In 849, he formed an alliance with several Greek cities. The allegiance defeated the Saracens near Ostia. Leo excommunicated Anastasius the Librarian who had mysteriously abandoned the church in 850, the year that Leo crowned Lothair and his son Louis II co-emperors. Leo's interest in church music was steady throughout his career. Leo died in 855.