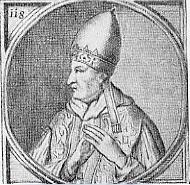 Benedict IV Benedict IV, son of a Roman patrician, reigned briefly and uneventfully from 900 until 903. Little is known about his life prior to his election. He was ordained by Formosus and convoked a council to validate his ordinations, after Stephen VII and John IX had invalidated them. Benedict crowned Louis III the Blind, the last Carolingian emperor, Holy Roman Emperor. Some believe that agents of Berengar of Friuli murdered Benedict, but the evidence suggests the pope died of natural causes.