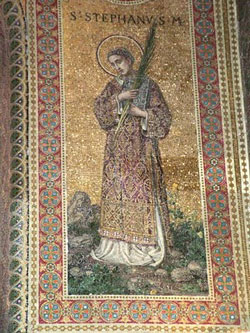 A Roman by birth, Pope/St. Stephen was a priest when elected to the papacy in 254. He believed that baptism is a sacrament that need be administered only once, even if heretics had done the baptizing. He and Cyprian of Carthage wrangled over the issue and over the pope's reinstatement of two Spanish bishops, whom a synod had deposed for apostacy. Stephen defended the right of bishops to appeal to Rome and was the first to use St. Peter as an argument for Rome's primacy. Stephen died a martyr in 257, during the persecutions of Emperor Valerian.

Continue reading about St. Stephen I