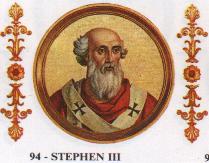 An orphan raised in the Lateran, Stephen II/III was a deacon when chosen to succeed Stephen II in 752. The following year, he became the first pope to cross the Alps when he travelled to meet Pepin III the Short and to seek protection for Rome. In 754, Stephen made Pepin, Charlemagne, and Carloman kings of the Romans, and when Pepin's army defeated the Lombards in 756, Pepin presented the pope with Ravenna, Rome, Venetia, and Istria, the properties that became the Papal States. Stephen restored and improved churches, and he saw that the Roman rite replaced the Gallican mass. He died in 772.