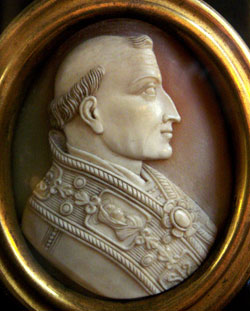 Urban, born Jacques Pantaléon in Troyes c. 1200, was elected to the papacy in 1261. He studied canon law at Paris and served as bishop of Verdun and patriarch of Jerusalem. He hoped to keep Sicily from the heirs of Frederick II, whom the council of Lyon excommunicated in 1245, because Urban wanted to restore papal influence in Italy. In 1263, he negotiated with Louis IX of France to put Louis' brother Charles of Anjou on the throne of Sicily. Urban died the following year before the treaty was signed.