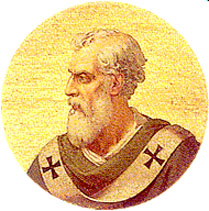 Clement III Born into a wealthy Roman family, Paolo Scolari was cardinal bishop of Praeneste when he was elected pope in 1187. He took the name Clement, and he made peace with Emperor Frederick I Barbarossa. Clement returned the papacy to Rome; his predecessors had been in exile for 16 years because of communards. He also regained the Papal States and made the church in Scotland accountable to Rome, rather than to York. In 1189, he preached the Third Crusade, during which the crusaders recaptured Jerusalem. Clement died in 1191, the year the crusade ended.