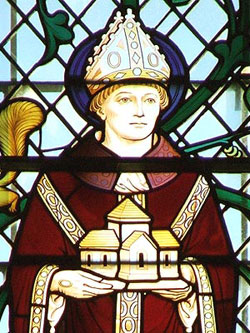 A Dane by birth, St. Oswald studied in the household of his uncle, Archbishop Odo of Fleury, France, where he was ordained. Returning to England in 959, he was later made Bishop of Worcester (962), by St. Dunstan. In this office, he worked hard to eliminate abuses and built many monasteries, including the famous abbey of Ramsey in Huntingdonshire. In 972, St. Oswald became Archbishop of York, although he also retained the See of Worcester in order to promote his monastic reforms which were under attack by Elfhere, King of Mercia. In addition to striving to improve the morals of his clergy, this holy man also labored to increase their theological knowledge - he himself wrote two treatises and several synodal decrees. St. Oswald was associated for most of his public life with St. Dunstan and St. Ethelwold and when he died in 992 popular veneration joined his name to theirs. He has been revered ever since as one of the three saints who revived English monasticism.