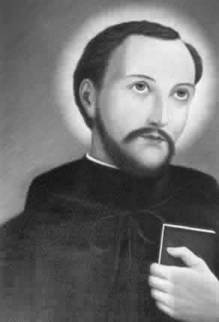 Father Noel Chabanel was one of the North American Martyrs. The murder of the missionaries and the havoc wrought amongst the Hurons, far from satisfying the ferocious Iroquois, only whetted their thirst for blood. Before the end of the year 1649, they had penetrated as far as the Tobacco Nation, where Father Garnier had founded a mission in 1641 and where the Jesuits now had two stations. The inhabitants of the village of Saint-Jean, hearing that the enemy was approaching, sent out their men to meet the attackers, who, however, having illicited from fugitives information of the defenseless condition of the settlement, took a round about way and arrived at the gates unexpectedly. An orgy of incredible cruelty followed, in the midst of which Garnier, the only priest in the mission, hastened from place to place, giving absolution to the Christians and baptizing the children and catechumens, totally unmindful of his own fate. While thus employed he was shot down by the muskets of an Iroquois. He strove to reach a dying man whom he thought he could help, but after three attempts, he collapsed, and subsequently received his death-blow from a hatchet which penetrated to the brain. Some of his Indian converts buried him on the spot where the Church had stood. Father Noel Chabanel, the missionary companion of Garnier, was immediately recalled. He had started on his way back with some Christian Hurons when they heard the cries of the Iroquois returning from Saint-Jean. The Father urged his followers to escape, but was too much exhausted to keep up with them. His fate was long uncertain, but a Huron apostate eventually admitted having killed the holy man out of hatred of the Christian Faith. Chabanel was not the least heroic of the martyrs. He possessed none of the adaptability of the rest, nor could he ever learn the language of the savages, the sight of whom, their food-everything about them-was revolting to him. Moreover he was tried by spiritual dryness during the whole of his stay in Canada. Yet in order to bind himself more inviolably to the work which his nature abhorred, he made a solemn vow, in the presence of the Blessed Sacrament, to remain till death in this mission to the Indians. Little did these noble martyrs who saw such scanty results accruing from their labors foresee that within a short time after their death, the truth they proclaimed would be embraced by their very executioners, and that their own successors would visit and Christianize almost every tribe withwhich the martyrs had been in contact. These martyrs of North American, Ss. John de Brebeuf, Isaac Jogues, Antony Daniel, Gabrial Lalemant, Charles Garnier, Noel Chabanel, Rene Goupil and John Lalande, were canonized in 1930. Their feast is observed throughout the United States and Canada and on December 26th, and on March 16th by the Society of Jesus.