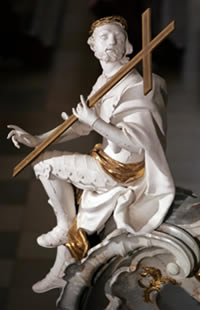 Achatius, also known as Acacius; the facts of his life are uncertain. He may have been bishop of Antioch or of Militene and may not have been a bishop at all. He was prominent in Christian circles in Antioch and when summoned to appear before the local Roman official, Martian, a dialogue on Christianity and it's teachings as compared to other religions ensued, which has come down to us. Achatius refused to sacrifice to pagan gods, and when he would not supply the names of his fellow Christians, was sent to prison. Supposedly when Emperor Decius received Martian's report of the trial he was so impressed by both men that he promoted Martian and pardoned Achatius. Though listed as a martyr there is no evidence he died for the faith.