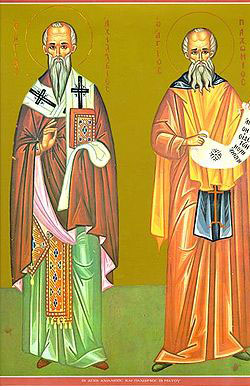 Bishop and theologian who lived in an era of dispute in the Church. Achillas was the bishop of Alexandria, Egypt, one of the most powerful cities in the world at the time. Succeeding as bishop a man named St. Peter the Martyr, Achillas ordained Arius, who was to begin the influential heresy of Arianism. When Achillas recognized the untruths in Arius' preaching, he took steps to defend the faith and was attacked by Arius and another heretical group called the Meletians. Achillas remained firm in the faith. A council held in Alexandria condemned Arius and forced him to flee to Palestine. Achillas, however, did not live to see this condemnation.