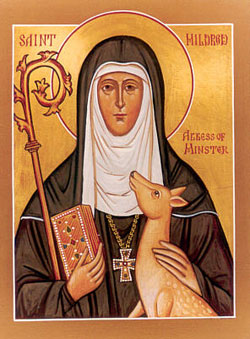 Mildred was the daughter of Merewald, an Anglian ruler of the seventh century. Her mother was St. Ermenburga, a Kentish princess. Mildred was educated at the convent school in Chelles, near Paris. Following her stay in France, she was pursued by a young man with marriage in mind. Mildred rejected his overtures and entered a monastery called Minster that had been founded by her mother. The monastery was located on the Isle of Thanet, and St. Theodore of Canterbury received her into the community of which she eventually became abbess. Mildred had reputation for great holiness and for generosity and compassion to the poor and rejected. She died about the year 700. St. Mildred saw the nobility of the religious life and thus rejected what could have been for her a titled life of ease. Her detachment from this world's goods led her to a firm commitment to Jesus and His poor.