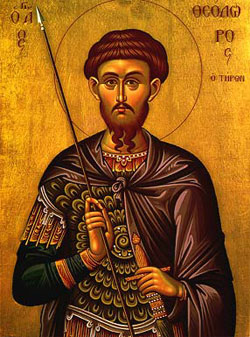 Theodore was born at Constantinople and nephew of Abbot St. Plato of Symboleon on Mount Olympus in Bithynia. He became a novice at a monastery established by his father on his estate at Saccudium near Constantinople, where he was sent to study by Plato, who had become abbot of Saccudium. Theodore was ordained in 787 at Constantinople, returned to Saccudium, and in 794, succeeded Plato as abbot. He and Plato denounced the action of Emperor Constantine VI in leaving his wife and marrying Theodota, and in 796, Theodore and his monks were exiled to Thessalonica. He returned a few months later when Constantine's mother, Irene, seized power, dethroned, and then blinded her son. Theodore reopened Saccudium but moved to Constantinople to escape Saracen raids, was named abbot of the famous Studios monastery, founded in 463 but now neglected and rundown, built it from a dozen monks to a thousand, and made it the center of eastern monastic life. He encouraged learning in the arts, founded a school of calligraphy, and wrote a rule for the monastery that was adopted in Russia, Bulgaria, Serbia, and even on Mount Athos. When he opposed the appointment of a layman, Nicephorus, (namesake of Emperor Nicephorus I) to succeed Tarasius, who had died in 806 as patriarch of Constantinople by Emperor Nicephorus I, Theodore was imprisoned by the emperor. When in 809, Nicephorus the patriarch, and a synod of bishops reinstated the priest, Joseph, who had married Constantine and Theodota and declared their marriage valid, Theodore's denunciations of the decision caused him to be exiled to Princes' Island with Plato and Archbishop Joseph of Thessalonica, Theodore's brother, and the monks of Studios were dispersed. Theodore returned on the emperor's death in 811 and was reconciled to Patriarch Nicephorus in a common fight against the iconoclasm of Emperor Leo V the Armenian. When Nicephorus was banished, Theodore became the leader of the Orthodox and was himself banished in 813 to Mysia by Leo. When Theodore's correspondence (among it, letters to Pope St. Paschal I emphasizing the primacy of the Bishop of Rome) was discovered, he was removed to Bonita in Anatolia. He endured great hardships the three years he was in prison there and he was transferred to Smyrna and put in the custody of an iconoclast bishop who wanted him beheaded and treated him with great harshness. Released on the murder of Leo in 820, he was again faced with a renewed iconoclasm under Emperor Michael the Stammerer, who refused to restore him as abbot or to restore any of the orthodox bishops to their Sees. Theodore left Constantinople and visited monasteries in Bithynia, founded a monastery on Akrita for many of his monks who had followed him, and died there on November 11. Many of his letters, treatises, sermons, and hymns are still existent. His feast day is November 11.