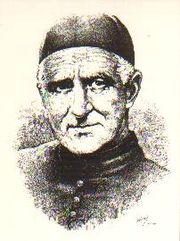 Michael was born on April 15, 1797, the eldest son of Arnold and Gratianne Garicoits. They were poor and Michael was hired out as a shepherd boy to a farmer. His desire to become a priest always met with "No, we are too poor" by his parents, but his grandmother talked the matter over with the parish priest. Through his efforts Michael earned his expenses for college by working after school hours for the clergy and in the bishop's kitchen. In December 1823 he was ordained priest in Bayonne cathedral by Bishop d'Astros. Michael's first assignment was at Cambo where he remained two years. He did much to revive religion there, combat Jansenism by the custom of frequent communion as well as by introducing Sacred Heart devotions. Father Garicoits' next call was to a professorship in the senior seminary for priests at Betharram, and then to be superior. In 1838, Father Garicoits drew up a constitution largely based on that of the sons of St. Ignatius. Like them, his missionaries were to take life vows and to spread far and wide. Associates gathered round him at Betharram, and all seemed promising, when the bishop disapproved of his idea of founding a new congregation. Not till 1852 was the community allowed to choose its own superior, and even then it was tied down by regulations which hampered its activity. Father Garicoits submitted, but with a heavy heart. He died on Ascension day, May 14, 1863. Fourteen years later the Society of Priests of the Sacred Heart of Betharram was approved by the Holy See on the lines the founder had laid down. St. Michael Garicoits, who was at one time spiritual director of the Basque house of the Daughters of the Cross at Igon, received much encouragement in his foundation from St. Elizabeth Bichier des Ages, and he was all his life a close friend of her congregation in the Basque country. Both of them were canonized in the year 1947. His feast day is May 14th.

Hi readers, it seems you use Catholic Online a lot; that's great! It's a little awkward to ask, but we need your help. If you have already donated, we sincerely thank you. We're not salespeople, but we depend on donations averaging $14.76 and fewer than 1% of readers give. If you donate just $5.00, the price of your coffee, Catholic Online School could keep thriving. Thank you. Help Now >
Continue reading about St. Michael Garicoits