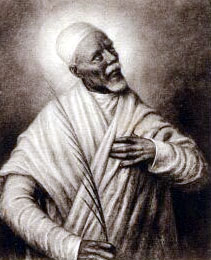 Vincentian martyr of Ethiopia also listed as Mikael Gabra. A native of that country, Michael became a Catholic in 1844 - converted by a Vincentian - and was ordained in 1851. Theodore II, the Negus of Ethiopia, launched a persecution of Catholics in 1855. Michael and four companions were arrested. Michael was dragged from place to place and died from abuse in prison on August 28. He was beatified in 1926.