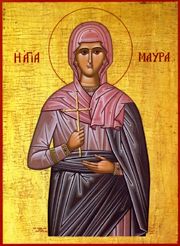 St. Maura Virgin September 21 A.D. 850 - She was nobly born at Troyes in Cham pagne in the ninth century, and in her youth obtained of God by her prayers the wonderful conversion of her father, who had till then led a worldly life. After his happy death, Maura continued to live in the most dutiful subjection and obedience to her mother, Sedulia and by the fervor of her example was the sanctification of her brother Eutropius and of the whole family. The greatest part of the revenues of their large estate was converted into the patrimony of the poor. The virgin's whole time was con. secreted to the exercises of prayer, to offices of obedience or charity, in attending on her mother and serving the poor, or to her work, which was devoted to the service either of the poor or of the church; for it was her delight in a spirit of religion to make sacred vestments, trim the lamps, and prepare wax and other things for the altar. As order in what we do leads a soul to God, according to the remark of St. Austin, she was regular in the distribution of her time, in all her actions. She spent almost the whole morning in the church, adoring God, praying to her divine Redeemer, and meditating on the circumstances of his sacred life and passion. Every Wednesday and Friday she fasted, allowing herself no other sustenance than bread and water, and she walked barefoot to the monastery of Mantenay, two leagues from the town, where she prayed a long time in the church, and with the most perfect humility and compunction laid open the secrets of her soul to the holy abbot of that place, her spiritual director, without whose advice she did nothing. The profound respect with which she was penetrated for the word of God, and whatever regarded the honor of his adorable name, is not to he expressed. So wonderful was her gift of tears, that she seemed never to fall upon her knees to pray hut they streamed from her eyes in torrents. God performed many miracles in her favor but it was her care to conceal his gifts, because she dreaded the poison of human applause. In her last sickness she received the extreme unction and viaticum with extraordinary marks of divine joy and love and reciting often the Lord's Prayer, expired at those words, Thy kingdom come, on the 21st of September, 850 being twenty-three years old. Her relics and name are honored in several churches in that part of France, and she is mentioned in the Gallican Martyrology. See her life written by Saint Prudentius of Troves, who was acquainted with her, also Goujet and Mezangui, Vies des Saints.