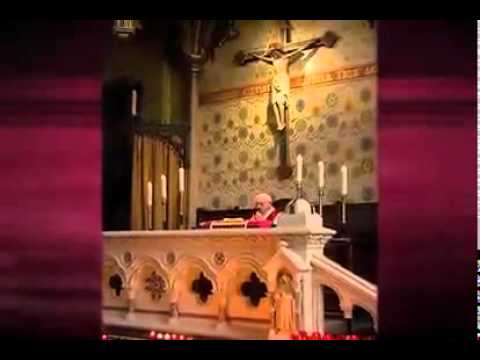 Josaphat, an Eastern Rite bishop, is held up as a martyr to church unity because he died trying to bring part of the Orthodox Church into union with Rome.

In 1054, a formal split called a schism took place between the Eastern Church centered in Constantinople and the Western Church centered in Rome. Trouble between the two had been brewing for centuries because of cultural, political, and theological differences. In 1054 Cardinal Humbert was sent to Constantinople to try and reconcile the latest flare up and wound up excommunicating the patriarch. The immediate problems included an insistence on the Byzantine rite, married clergy, and the disagreement on whether the Holy Spirit proceeded from the Father and the Son. The split only grew worse from there, centering mostly on whether to except the authority of the Pope and Rome.

More than five centuries later, in what is now known as Byelorussia and the Ukraine but what was then part of Poland-Lithuania, an Orthodox metropolitan of Kiev and five Orthodox bishops decided to commit the millions of Christians under their pastoral care to reunion with Rome. Josaphat Kunsevich who was born in 1580 or 1584 was still a young boy when the Synod of Brest Litovsk took place in 1595-96, but he was witness to the results both positive and negative.

Many of the millions of Christians did not agree with the bishops decision to return to communion with the Catholic Church and both sides tried to resolve this disagreement unfortunately not only with words but with violence. Martyrs died on both sides. Josaphat was a voice of Christian peace in this dissent.

After an apprenticeship to a merchant, Josaphat turned down a partnership in the business and a marriage to enter the monastery of the Holy Trinity at Vilna in 1604. As a teenager he had found encouragement in his vocation from two Jesuits and a rector who understood his heart. And in the monastery he found another soulmate in Joseph Benjamin Rutsky. Rutsky who had joined the Byzantine Rite under orders of Pope Clement VIII after converting from Calvinism shared the young Josaphat's passion to work for reunion with Rome. The two friends spent long hours making plans on how they could bring about that communion and reform monastic life.

The careers of the two friends parted physically when Josaphat was sent to found new houses in Rome and Rutsky was first made abbot at Vilna. Josaphat replaced Rutsky as abbot when Rutsky became metropolitan of Kiev. Josaphat immediately put into practice his early plans of reform. Because his plans tended to reflect his own extremely austere ascetic tendencies, he was not always met with joy. One community threatened to throw him into the river until his general compassion and his convincing words won them over to a few changes.

Josaphat faced even more problems when he became first bishop of Vitebsk and then Polotsk in 1617. The church there was literally and figuratively in ruins with buildings falling apart, clergy marrying two or three times, and monks and clergy everywhere not really interested in pastoral care or model Christian living. Within three years, Josaphat had rebuilt the church by holding synods, publishing a catechism to be used all over, and enforcing rules of conduct for clergy. But his most compelling argument was his own life which he spent preaching, instructing others in the faith, visiting the needy of the towns.

But despite all his work and the respect he had, the Orthodox separatists found fertile ground with they set up their own bishops in the exact same area. Meletius Smotritsky was named his rival archbishop of Polotsk. It must have hurt Josaphat to see the people he had served so faithfully break into riots when the King of Poland declared Josaphat the only legitimate archbishop. His former diocese of Vitebsk turned completely against the reunion and him along with two other cities.

But what probably hurt even more was that the very Catholics he looked to for communion opposed him as well. Catholics who should have been his support didn't like the way he insisted on the use of the Byzantine rite instead of the Roman rite. Out of fear or ignorance, Leo Sapiah, chancellor of Lithuania, chose to believe stories that Josaphat was inciting the people to violence and instead of coming to his aid, condemned him. Actually his only act of force was when the separatists took over the church at Mogilev and he asked the civil power to help him return it to his authority.

In October 1623, Josaphat decided to return to Vitebsk to try to calm the troubles himself. He was completely aware of the danger but said, "If I am counted worthy of martyrdom, then I am not afraid to die."

The separatists saw their chance to get rid of Josaphat and discredit him if they could only stir Josaphat's party to strike the first blow. Then they would have an excuse to strike back. Their threats were so public that Josaphat preached on the gospel verse John 16:2, "Indeed, an hour is coming when those who kill you will think that by doing so they are offering worship to God." He told the people, "You people want to kill me. You wait in ambush for me in the streets, on the bridges, on the highways, in the marketplace, everywhere. Here I am; I came to you as a shepherd. You know I would be happy to give my life for you. I am ready to die for union of the Church under St. Peter and his successor the Pope."

But aside from words, Josaphat insisted that his party not react in anyway that did not show patience and forbearance. When the separatists saw that they were not getting the violent response they had hoped for they decided to wear Josaphat and the others down as they plotted more direct action. A priest named Elias went to the house where everyone was staying and shouted insults and threats to everyone he saw, focusing on calumniating Josaphat and the Church of Rome.

Josaphat knew of the plot against him and spent his day in prayer. In the evening he had a long conversation with a beggar he had invited in off the streets.

When Elias was back the next morning of November 12, the servants were at their wits' ends and begged Josaphat's permission to do something. Before he went off to say his office he told them they could lock Elias away if he caused trouble again. When he returned to the house he found that the servants had done just that and Josaphat let Elias out of the room.

But it was too late. The mistake had been made. Elias had not been hurt in anyway but as soon as the mob saw that Elias had been locked up they rejoiced in the excuse they had been waiting for. Bells were rung and mobs descended on the house. By the time they reached the house, Elias had been released but the mob didn't care; they wanted the blood they had been denied for so long.

Josaphat came out in the courtyard to see the mob beating and trampling his friends and servants. He cried out, "My children what are you doing with my servants? If you have anything against me, here I am, but leave them alone!" With shouts of "Kill the papist" Josaphat was hit with a stick, then an axe, and finally shot through the head. His bloody body was dragged to the river and thrown in, along with the body of a dog who had tried to protect him.

The unsung heroes of this horrible terrorism were the Jewish people of Vitebsk. Some of the Jewish people risked their own lives to rush into the courtyard and rescue Josaphat's friends and servants from the bloodthirsty mobs. Through their courage, lives were saved. These same Jewish people were the only ones to publicly accuse the killers and mourn the death of Josaphat while the Catholics of the city hid in fear of their lives.

As usual violence had the opposite affect from that intended. Regret and horror at how far the violence had gone and the loss of their archbishop swung public opinion over toward the Catholics and unity. Eventually even Archbishop Meletius Smotritsky, Josaphat's rival, was reconciled with Rome. And in 1867 Josaphat became the first saint of the Eastern church to be formally canonized by Rome.