Ignatius was the son of a poor farmer in Laconi, Italy. He was born on December 17, 1701. When he was about seventeen, he became very ill. He promised to be a Franciscan if he would get better. But when the illness left him, his father convinced him to wait. A couple of years later, Ignatius was almost killed when he lost control of his horse. Suddenly, however, the horse stopped and trotted on quietly. Ignatius was convinced, then, that God had saved his life. He made up his mind to follow his religious vocation at once.

Brother Ignatius never had any important position in the Franciscan order. For fifteen years he worked in the weaving shed. Then, for forty years, he was part of the team who went out from house to house. They requested food and donations to support the friars. Ignatius visited families and received their gift. But the people soon realized that they received a gift in return. Brother Ignatius consoled the sick and cheered up the lonely. He made peace between enemies, converted people hardened by sin and advised those in trouble. They began to wait for his visits.

There were some difficult days, too. Once in a while, a door was slammed in his face, and often the weather was bad. Always, there were miles and miles to walk. But Ignatius was dedicated. Yet people noticed he used to skip one house. The owner was a rich moneylender. He made the poor pay back much more than they could afford. This man felt humiliated because Ignatius never visited his home to ask for donations. He complained to Brother Ignatius' superior. The superior knew nothing about the moneylender so he sent Ignatius to his home. Brother Ignatius never said a word, but did as he was told. He returned with a large sack of food. It was then that God worked a miracle. When the sack was emptied, blood dripped out. "This is the blood of the poor," Ignatius explained softly. "That is why I never ask for anything at that house." The friars began to pray that the moneylender would repent.

Hi readers, it seems you use Catholic Online a lot; that's great! It's a little awkward to ask, but we need your help. If you have already donated, we sincerely thank you. We're not salespeople, but we depend on donations averaging $14.76 and fewer than 1% of readers give. If you donate just $5.00, the price of your coffee, Catholic Online School could keep thriving. Thank you. Help Now >
Continue reading about St. Ignatius of Laconi 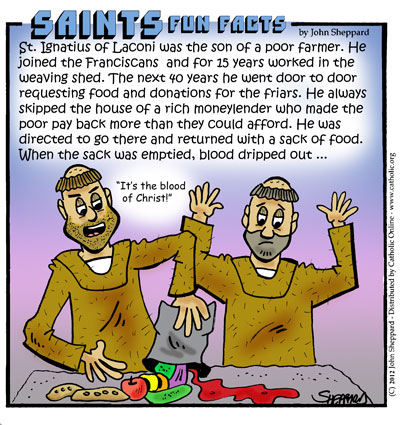