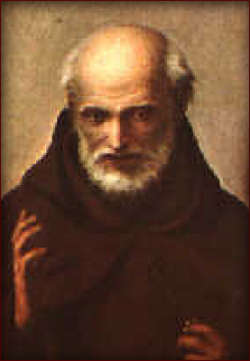 Saint Ignatius of Santhiá was born on 5 June 1686 in Santhiá, in the Vercelli region of Northern Italy and died in Turin on 21 September 1770. He was a Capuchin priest, who was faithful to the Franciscan spirit, especially by his obedience, simplicity and humility. He was renowned for his gift of spiritual direction and concern for the spiritual growth of the faithful. He was also called the "father of sinners and the lost" thanks to his particular ability to deal with the "spiritually sick".

He was baptized Lorenzo Maurizio, the fourth of six children of the upper-class Belvisotti family. He received his early education from a good priest, who inspired him and helped discern his call to enter the priesthood. In 1710 he was ordained a diocesan priest. After six years of priestly ministry, he joined the Capuchin Friars. At the time he suffered from the criticism of his family and parish who did not understand his decision. In the Capuchin Order Ignatius finally found the inner peace he had been searching for in the simplicity of Franciscan life.

On 24 May 1717, he made his religious profession, and from that day he was like putty in the hands of his superiors. He began his spiritual journey being sent from one house to another in the Savoy region of Northern Italy. He was happy to be moved around out of obedience and honoured to be able to serve his brothers. He was completely at "God's disposition".

In 1727, Ignatius was sent to the convent in Torino-Monte, with the responsibility of prefect of the sacristy and confessor for the laity, a mission he was to fulfill for the last 24 years of his life when he returned to Turin after serving as master of novices and chief of chaplains for the army of the Kingdom of Savoy. In this ministry he showed his fatherly concern for others and the spiritual wisdom that is learned at the foot of the Crucified One. It was not long before religious, priests, the faithful and the most hardened sinners began coming to the monastery to make their confession and to receive spiritual direction.

In 1731, he was sent to the monastery of Mondově, where he was made master of novices and vicar of the monastery. He was in charge of the novitiate for 14 years and his only desire was to make the novices entrusted to his care true followers of Christ and obedient sons of St Francis. His teaching was founded on two pillars: divinely loving the novices and teaching by example more than by words. He was available at all hours of the day and night for novices in need of help and he knew each one of them, making their formation his top priority. In 1744 he had to leave the novitiate and go to Turin because he suffered from a mysterious eye ailment that led to near blindness. He was partially cured so that he could return to active ministry.

In 1743-1746, war broke out in the Piedmont. This also brought with it the influx of the wounded and an epidemic. The King of Sardinia-Piedmont, Charles Emmanuel III asked the Capuchins to provide medical and spiritual care for the hospitals. Fr Ignatius was made head chaplain and offered his assistance for two years in the hospitals of Asti, Vinovo and Alessandria, offering an example of tireless activity and piety, serving and healing in a spirit of genuine evangelical love.

When Piedmont was at peace, he returned once more to his convent in Turin-Monte where he would remain for 24 years as spiritual director and confessor. He visited the sick and begged for money and food for the needy. He died in Turin-Monte on 21 September 1770. He would often say: "Paradise is not made for slackers. Let's get to work!". To all people, religious brothers and laity, he taught the way of holiness and of abandonment in God's hands, by his example and by his words.