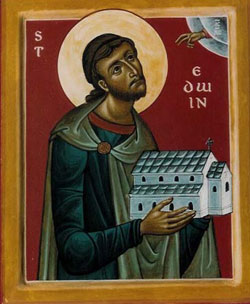 In the year 616, King Ethelfrith was slain in battle by Redwald, King of the East Angles. Edwin of Deira became king of the whole kingdom of Northumbria and after the death of Redwald, he had a certain lordship over the other English kings. He married Ethelburga, daughter of St. Ethelbert, King of Kent after promising to allow her to practice her Christian religion. St. Paulinus was sent as chaplain to the Queen and bishop for his converts. When Queen Ethelburga gave birth to a daughter, she was baptized with twelve others on Whitsunday, and called Eanfleda; they were the first fruits of the Northumbrians. Edwin was a man of unusual wisdom and deliberated in his heart to which religion he should follow. Paulinus continued to instruct him and to pray for his conversion. King Edwin was baptized at York at Easter in the year 627, on the site of the present York Minster, in the wooden church of St. Peter which he had caused to be built. This good king had reigned seventeen years when the Welsh Cadwalon marched in arms against him with Penda of Mercia, a pagan. King Edwin met them at Hatfield Chase on October 12, 633, and in the ensuing battle he was slain. St. Edwin was certainly vernerated in England as a martyr, but though his claims to sanctity are else doubtful than those of some other royal saints, English and other, he has had no liturgical cultus so far as is known. His relics were held in veneration, churches were dedicated in his honour in London and at Brean in Somerset; and Pope Gregory XIII permitted him to be represented among the English martyrs on the walls of the chapel of the Venerabile at Rome. His feast day is October 12th.