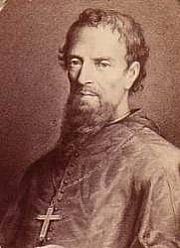 A native of Aix-en-Provence, France, Laurence Imbert joined the Paris Foreign Missionary Society and was sent to China in 1825. He worked there as a missionary for twelve years and was named titular bishop of Capsa. In 1837, he was sent to Korea and entered the country secretly, as Christianity was forbidden there. He was successful in his missionary activities, but in 1839 a wave of violent persecutions of the Christians swept the country. In the hope of ending the persecution of native Christians, he, Fr. Philibert Maubant, and Fr. James Honore' Chastan, who had preceded him into Korea, surrendered to the authorities. They were bastinadoed and then beheaded at Seoul on September 21. During the same persecution, John Ri was bastinadoed and suffered martyrdom, and Agatha Kim was hanged from a cross by her arms and hair, driven over rough country in a cart, and then stripped and beheaded. In 1925, Laurence and his companions and many others, eighty-one in all, who had been executed for their faith, were beatified as the Martyrs of Korea. They were canonized by Pope John Paul II in 1984. Their feast day is September 21.