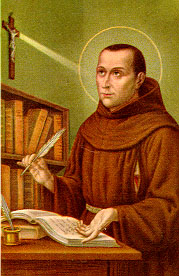 John Charles Marchioni was born at Sezze, Italy, on October 19, of humble parents. He became a shepherd and wanted to become a priest. When unable to do so because of his poor scholarship (He barely learned to read and write), he became a lay brother at Naziano, served in various menial positions - cook, porter, gardener - at different monasteries near Rome and became known for his holiness, simplicity, and charity. He wrote several mystical works, lived a life of great mortifications, and worked heroically to help the stricken in the plague of 1656. He died in Rome on January 6. His family name may have been Melchior, and he is also known as Charles of Sezze. He was canonized by Pope John XXIII in 1959. His feast day is January 5th.