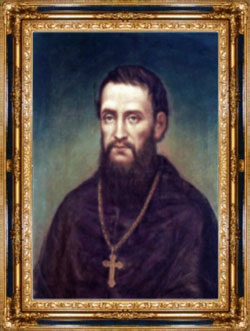 The family of Etienne-Theodore Cuenot, of Beaulieu, France, was so poor that when Etienne decided in his teenage years to begin seminary studies, his mother could only obtain the fabric needed to make him a fitting suit of clothes by cutting up her wedding gown. Etienne saw his mother weeping as she prepared to sacrifice this cherished memento of her wedding day for his sake. When years later Etienne was ordained a priest, he showed his gratitude by giving his mother a new dress. Father Cuenot subsequently entered the Paris Society for Foreign Missions, and set out for the Far East in January of 1828. After arriving at Macao, he continued on to Vietnam to begin his missionary labors there. In 1835, Father Cuenot was consecrated an auxiliary bishop of the Vietnamese missions. Over the twenty-six years of his episcopate, he ordained fifty-six native priests and procured Vietnamese translations of The Imitation of Christ and portions of the Bible. In 1861 Bishop Cuenot was captured by troops of the pagan emperor Tu-Duc. But before he could be executed, he died in prison.