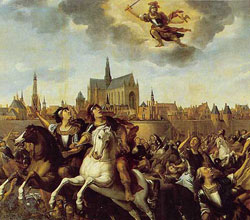 This famous hermit, also called Allowin, was a nobleman, and native of that part of Brabant called Hesbaye. After having led a very irregular life he was left a widower, and was moved to conversion to God by a sermon which he heard St. Amand preach at Ghent. Going home he distributed all his money among the poor, and went to the monastery at Ghent that was afterwards called by his name. Here Bavo received the tonsure at the hand of St. Amand and was animated to advance daily in the fervor of his penance and the practice of virtue. St. Bavo seemed to have accompanied St. Amand on his missionary journeys in France and Flanders, setting an example by the humiliation of his heart, the mortification of his will, and the rigor of his austerities. St. Amand after some time gave him leave to lead an eremitical life, and he is said first to have chosen for his abode a hollow trunk of a large tree, but afterward, built himself a cell at Mendonck, where vegetables and water were his chief subsistance. St. Bavo is said on one occasion to have done penance for selling a man into serfdom by making the man lead him by a chain to the common lockup. Bavo at length returned to the monastery at Ghent, where St. Amand had appointed St. Floribert Abbot; and with his approval Bavo built himself a new cell in a neighboring wood, where he lived a recluse until the end of his life. St. Amand and St. Floribert attended him on his death bed and his peaceful passage made a deep impression on all who were present. As in the  diocese of Ghent so that in Haarlem in Holland, St. Bavo is titular of the Cathedral and patron of the diocese. His feast day is October 1.