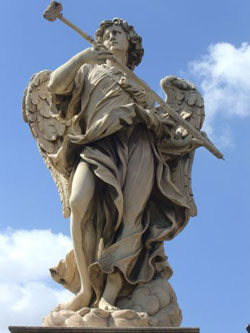 St. Angelo, who was one of the early members of the Carmelite Order, suffered martyrdom for the Faith at Leocata, Sicily. The story of his life, as it has come down, is not very reliable. It may be summarized as follows: His parents were Jews of Jerusalem who were converted to Christianity by a vision of our Lady. She told them that the Messiah they were awaiting had already come to pass and had redeemed His people, and she promised them two sons, who would grow up as flourishing olive trees on the heights of Carmel-the one as a patriarch and the other as a glorious martyr. From childhood the twins displayed great mental and spiritual gifts when, at the age of eighteen, they entered the Carmelite Order, they already spoke Greek, Latin, and Hebrew. After Angelo had been a hermit on Mount Carmel for five years, Our Lord appeared to him and bade him go to Sicily, where he would have the grace to offer the sacrifice of his life. The saint immediately obeyed the call. During his journey from the East as well as after his arrival in Sicily, he converted many sinners by his teaching, no less than by his miracles. At Palermo over two hundred Jews sought Baptism as the result of his eloquence. Similar success attended his efforts in Leocata, but he aroused the fury of a man called Berengarius, whose shameless wickedness he had denounced. As he was preaching to a crowd, a band of ruffians headed by Berengarius broke through the throng and stabbed him. Mortally wounded, Angelo fell on his knees, praying for the people, but especially for his murderer.