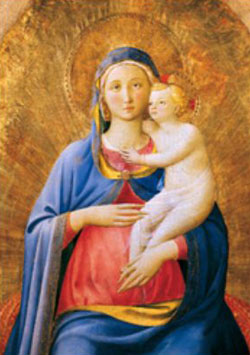 Fra Angelico was an Italian painter of the early Renaissance who combined the life of a devout friar with that of an accomplished painter. He was called Angelico (Italian for "angelic") and Beato (Italian for "blessed") because the paintings he did were of calm, religious subjects and because of his extraordinary personal piety. Originally named Guido di Pietro, Angelico was born in Vicchio, Tuscany. He entered a Dominican convent in Fiesole in 1418 and about 1425 became a friar using the name Giovanni da Fiesole. Although his teacher is unknown, he apparently began his career as an illuminator of missals and other religious books. He began to paint altarpieces and other panels; among his important early works are the MADONNA OF THE STAR (1428?-1433, San Marco, Florence) and CHRIST IN GLORY SURROUNDED BY SAINTS AND ANGELS (National Gallery, London), which depicts more than 250 distinct figures. Among other works of that period are two of the CORONATION OF THE VIRGIN (San Marco and Louvre, Paris) and THE DEPOSITION and THE LAST JUDGMENT (San Marco). His mature style is first seen in the MADONNA OF THE LINEN WEAVERS (1433, San Marco), which features a border with 12 music-making angels. In 1436 the Dominicans of Fiesole moved to the convent of San Marco in Florence, which had recently been rebuilt by Michelozzo. Angelico, sometimes aided by assistants, painted many frescoes for the cloister, chapter house, and entrances to the 20 cells on the upper corridors. The most impressive of these are THE CRUCIFIXION, CHRIST AS A PILGRIM, AND TRANSFIGURATION. His altarpiece for San Marco (1439) is one of the first representations of what is known as a Sacred Conversation: the Madonna flanked by angels and saints who seem to share a common space. In 1445 Angelico was summoned to Rome by Pope Eugenius IV to paint frescoes for the now destroyed Chapel of the Sacrament in the Vatican. In 1447, with his pupil Benozzo Gozzoli, he painted frescoes for the chapel of Pope Nicholas in the Vatican, are SCENES FROM THE LIVES OF SAINTS STEPHEN AND LAWRENCE (1447-1449), probably painted from his designs by assistants. From 1449-1452 Angelico was prior of his convent in Fiesole. He died in the Dominican convent in Rome on March 18, 1455. Angelico combined the influence of the elegantly decorative Gothic style of Gentile da Fabriano with the more realistic style of such Renaissance masters as the painter Masaccio and the sculptors Donatello and Ghiberti, all of whom worked in Florence. Angelico was also aware of the theories of perspective proposed by Leon Battista Alberti. Angelico's representation of devout facial expressions and his use of color to heighten emotion are particularly effective. His skill in creating monumental figures, representing motion, and suggesting deep space through the use of linear perspective, especially in the Roman frescoes, mark him as one of the foremost painters of the Renaissance.

Hi readers, it seems you use Catholic Online a lot; that's great! It's a little awkward to ask, but we need your help. If you have already donated, we sincerely thank you. We're not salespeople, but we depend on donations averaging $14.76 and fewer than 1% of readers give. If you donate just $5.00, the price of your coffee, Catholic Online School could keep thriving. Thank you. Help Now >
Continue reading about Fra Angelico