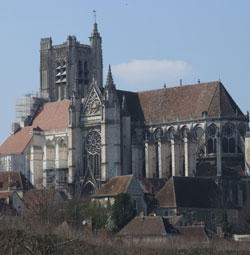 First bishop of Auxerre in Gaul. Peregrinus was supposedly a Roman who received consecration as bishop from Pope Sixtus II in Rome and was sent to assist the evangelization of Gaul. He met with great success in the area around Massilia and Lyons, France. Most of what is known about him is legend, although there is no question that he was martyred under Emperor Diocletian in the late third century or early fourth century for interrupting a pagan ritual honoring Jupiter.