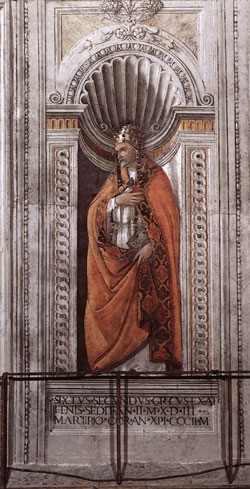 A Roman of Greek descent, Sixtus was elected to the papacy in 257. He repaired the rift between the sees of Rome and Carthage that had developed over the issue of baptism and rebaptism. Like his predecessor Stephen, Sixtus believed that baptism is a once-in-a-lifetime event, but unlike Stephen, Sixtus tolerated those who rebaptized. The martyrdom of St. Sixtus was dramatic. Forbidden to hold services, he and his deacons continued to worship in the chapel in the cemetary of Prćtextatus. One day in 258, as the pope preached, soldiers broke into the chapel and beheaded Sixtus. Four of his eight attendants were also beheaded. The authorities executed another three later that day. St. Lawrence was martyred four days later.