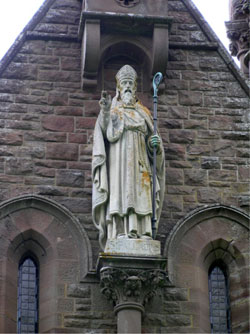 An early Irish missionary, the first bishop of Ireland, and the immediate predecessor to St. Patrick. Perhaps originally of British or Roman descent, Palladius was possibly a deacon in Rome or, more likely, in Auxerre, France. According to the fifth century theologian Prosper of Aquitaine, Palladius convinced Pope Celestine I to send St. Germanus, bishop of Auxerre, to England with the aim of expunging the Pelagian heresy which was then rampant. It seems that Palladius was then consecrated a bishop by the pope who, in about 430, sent Palladius to preach among the Irish. He landed near Wicklow and founded at least three churches in Leinster, but his mission apparently made little impact upon the native population. Palladius departed Ireland and sailed for Scotland, where he preached among the Picts. He died at Fordun, near Aberdeen, a short time after arriving, although there is an unreliable Scottish tradition that he lived among the Picts for more than twenty years.