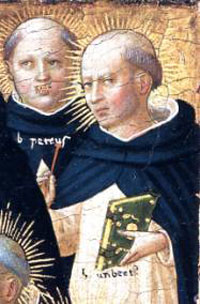 Humbert was born at Romans, near Valence, France. He studied at Paris, where he received his doctorate in law, joined the Dominicans in 1224, made a pilgrimage to the Holy Land, and on his return in 1240, was elected provincial of the Roman province of the Dominicans. He was elected provincial of France in 1244, and in 1254 became the fifth master general of the Dominicans. He approved a final revision of the Dominican Liturgy, promoted education, and was active in clerical reformation. He resigned his generalate at a general chapter in London in 1263, retired to the priory of Valence, emerged briefly at the request of Pope Clement IV to settle a dispute among the Cistercians, and died at Valence on July 14. He wrote several treatises, among them Treatise on Preaching, the fruit of his success as a preacher. Though called Blessed by some authorities, his cult has never been formally approved.