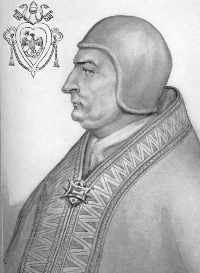 Clement IV Born c. 1195, Gui Foulques served the counts of Toulouse and was a legal consultant to Louis IX. Widowed with two daughters, Gui was ordained c. 1256. He became a cardinal five years later and was in England on a diplomatic mission when he was elected pope in 1265. He took the name Clement because he was born on St. Clement's day. The following year, he made Charles of Anjou, brother of King Louis IX, King of Naples and Sicily; Charles' victories over Manfred and Conradin ended the Hohenstaufen line, which had once plagued so many popes. Clement lived in Perugia and Viterbo because the Romans were hostile to the papacy. Clement aided the Spanish in their battles with the Moors and corresponded with Michael VIII Paleologos about reuniting the Western and Eastern churches. Clement died in 1268, and three years passed before the cardinals elected Gregory X.