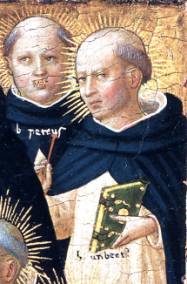 Having entered the Dominican Order in Paris, Humbert, of Romans, France, became the Dominicans' Master General in 1254. In this capacity he advanced his order's missionary apostolate. He also codified the Dominicans' distinctive liturgical rite by compiling an authoritative anthology of Dominican practices known as the Humbert Codex. In 1255, Humbert co-authored with the Franciscan minister general (Blessed) John of Parma a letter to all Dominicans and Franciscans urging mutual friendship between the two orders, which are both "sent by eternal charity to work for the salvation of men." In 1263 Humbert resigned his office in order to spend his remaining years in prayer and study at the Dominican friary of Valence. He wrote a manual for homilists, his Treatise on Preaching, in which he describes the work of a preacher as a "hunt for souls." Developing this idea further, he observes: "Preachers, like keen huntsmen, seek sinners of all kinds, souls yet untamed which they wish to offer as a banquet to the Lord."
Continue reading about Bl. Humbert of Romans