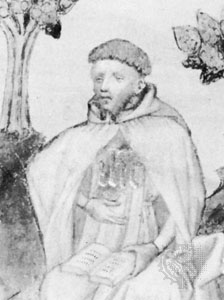 English mystic and hermit. Born at Thornton, Yorkshire, England, circa 1300, he was educated at Oxford and in Paris from 1320-1326, before entering into the life of a hermit on the estate of a friend, John Dalton of Pickering in 1326. After several years of intense contemplation, he took to wandering across England, finally settling down at Hampole where he assisted the spiritual development of the nuns in a nearby Cistercian community. He died there on September 29. Richard was very well known and his writings widely read during the fourteenth and fifteenth centuries. He was one of the first religious writers to use the vernacular. A cult developed to promote his cause after miracles were reported at his tomb, although the cause was never officially pursued. His works include letters, scriptural commentaries, and treatises on spiritual perfection. Perhaps his best known writing was De Incendio Amoris. He also wrote a poem, Pricke of Conscience.