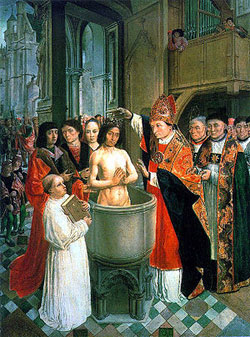 St. Remigius or Remi, Bishop of Rheims was the great apostle of the Franks, and was illustrious for his learning, sanctity and miracles, which in his episcopacy of seventy and more years, rendered his name famous in the church. As a boy he made great progress in learning, and in the opinion of St. Sidonius Apollinaris, who was acquainted with him in the earlier part of his life, he became the most eloquent person in that age. When only twenty-two, too young to be a priest, much less a bishop, he was chosen in 459 to fill the vacant See of Rheims. But he was ordained and consecrated in spite of his youth, and amply made up for lack of experience by his fervor and energy.

Under the protection of King Clovis, who was baptized by Remigius, St. Remigius spread the gospel of Christ among the Franks, in which work God endowed him with an extraordinary gift of miracles. The bishops who were assembled in a conference that was held at Lyons against the Arians in his time, declared they were stirred to exert their zeal in defense of the Catholic Faith by the example of Remigius, "who", say they, "has everywhere destroyed the altars of the idols by a multitude of miracles and signs." St. Remigius, whom St. Gregory of Tours refers to as "a man of great learning, fond of rhetorical studies, and equal in his holiness to St. Silvester", died about the year 530. His feast day is October 1.