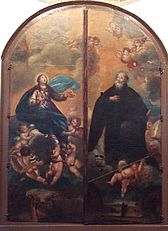 Inigo, also known as Eneco, born in the eleventh century, was a native of Bilbao, Spain. Early in his life he became a hermit. Next he went to Aragon where he became a monk at San Juan de Pena, and eventually he was elected Prior. When his term was completed, Inigo again took up the life of a hermit in the Aragon mountains. However, in 1029, King Sancho the Great convinced Inigo to become Abbot of a group of monks in a monastery at Ona. The monastery, founded by Sancho's father-in-law, was in need of reform, and he wanted Inigo to lead the process. Inigo was very successful in the reform movement, and he developed a reputation as a peacemaker. Moreover, some attributed miracles to his intercession. He died at Ona on June 1, 1057, and was canonized by Pope Alexander IV in 1259. St. Inigo from his earliest years was drawn to both the contemplative and the eremitical life. A man of God, he was able to bring peace and harmony to the monastery at Ona, and he won over others to the reasonableness and satisfaction of leading the monastic life to its fullest. What is more, the good example of the monks helped the people who lived in the area to become convinced of the beauty and satisfaction of a life lived in God's presence and love.

Hi readers, it seems you use Catholic Online a lot; that's great! It's a little awkward to ask, but we need your help. If you have already donated, we sincerely thank you. We're not salespeople, but we depend on donations averaging $14.76 and fewer than 1% of readers give. If you donate just $5.00, the price of your coffee, Catholic Online School could keep thriving. Thank you. Help Now >
Continue reading about St. Inigo