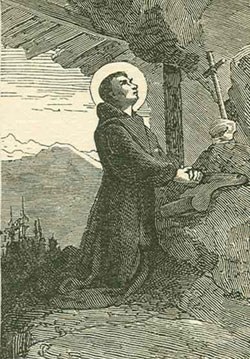 William was a young boy of Paris who was taught by his good uncle, the Abbot Hugo. When it was time for him to decide what he should become, William prayed to God to help him make the right choice. Then, on his uncle's advice, he made up his mind to become a priest. Although William wanted only to do good to everyone, there were some who became his enemies. They were living bad lives, and every time they saw how kind and pure and devout William was, it made them realize how sinful they were. Instead of changing and following his good example, they tried to get rid of him. They even told the bishop lies so that he would not make William a priest. But the bishop knew what a holy man William really was and he paid no attention to the false accusations. Next his enemies tried to have the Saint sent away, but again God did not let their plan work. In the end, it was these evil men who were sent away - and by the Pope himself! St. William and three companions were asked to go to Denmark to convert sinners and pagans and make the Religious there more fervent. The Saint and his companions got a good start, but then everything began to go wrong. They could hardly stand the bitter cold weather and they were very, very poor. Besides that, they did not understand the language, and they had many enemies. Frightened, William's three friends gave up and went home to France. But the Saint remained. To show how pleased He was with St. William's trust in Him, Our Lord rewarded him with the conversion of all he had come to help. Then for thirty years the holy Abbot lived in peace and fervor with a great many good monks who imitated his virtues and love of God. When things get hard, let us not be quitters. God always helps those who turn to Him for help.