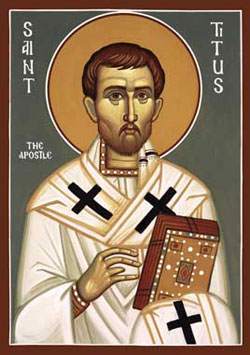 A disciple and companion of St. Paul to whom the great saint addressed one of his letters. Paul referred to Titus as "my true child in our common faith". Not mentioned in the Acts of the Apostles, he was noted in Galatians where Paul writes of journeying to Jerusalem with Barnabas, accompanied by Titus. He was then dispatched to Corinth, Greece, where he successfully reconciled the Christian community there with Paul, its founder. Titus was later left on the island of Crete to help organize the Church, although he soon went to Dalmatia, Croatia. According to Eusebius of Caesarea in the Ecclesiastical Histor y, he served as the first bishop of Crete. He was buried in Cortyna (Gortyna), Crete; his head was later translated to Venice during the invasion of Crete by the Saracens in 832 and was enshrined in St. Mark’s, Venice, Italy.