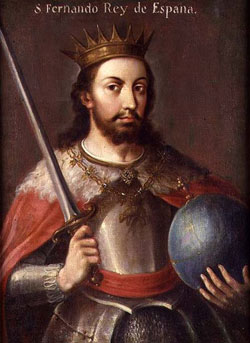 Ferdinand III of Castile was the son of Alfonso IX, King of Leon, and Berengaria, daughter of Alfonso III, King of Castile (Spain). He was declared king of Castile at age eighteen. Ferdinand was born near Salamanca; proclaimed king of Palencia, Valladolid, and Burgos; his mother advised and assisted him during his young reign. He married Princess Beatrice, daughter of Philip of Suabia, King of Germany and they had seven sons and three daughters. His father (the king of Leon) turned against him and tried to take over his rule. The two reconciled later, and fought successfully against the Moors. In 1225, he held back Islamic invaders; prayed and fasted to prepare for the war; extremely devoted to the Blessed Virgin. Between 1234-36, Ferdinand conquered the city of Cordoba from the Moors. Queen Beatrice died in 1236, and he overtook Seville shortly thereafter. He founded the Cathedral of Burgos and the University of Salamanca; married Joan of Ponthieu after the death of Beatrice. He died on May 30th after a prolonged illness, and buried in the habit of his secular Franciscan Order. His remains are preserved in the Cathedral of Seville and was canonized by Pope Clement X in 1671. Ferdinand was a great administrator and a man of deep faith. He founded hospitals and bishoprics, monasteries, chuches, and cathedrals during his reign. Her also compiled and reformed a code of laws which were used until the modern era. Ferdinand rebuilt the Cathedral of Burgos and changed the mosque in Seville into a Cathedral. He was a just ruler, frequently pardoning former offenders to his throne. His feast day is May 30th.